There’s a reason guitarists love classic stompbox guitar effects—they sound amazing and they’re easy to use. Line 6 M-5 effects pedal gives you a library of over 100 classic stompboxes, including rare and eclectic studio effects, premium Line 6 originals and more. Dial in distinctive distortions, velvety reverbs, transcendent delays, lush choruses and other stunning guitar effects in seconds. You get the soul and feel of classic stompboxes—without the need for a roadcase full of pedals.

click image to enlarge
Line 6 M5 Stompbox Modeler
A COMPLETE ARSENAL OF EFFECTS
Bring classic stompbox mojo to your pedalboard.
Over 100 M-class effects in a single space on your pedal board. 24 presets, tons of tone, plus an expression pedal input for even more control.

INTUITIVE STOMPBOX-STYLE EDITING
Designed for total guitar tone control.
Forget complicated menus—M-Series effects feature stompbox-style knobs so you can quickly edit your guitar tones on the fly. And just like classic stompboxes, your settings will remain after you power down. Choose from amazing presets or create your own unique blends and integrate seamlessly with your existing gear, so you can take your sound even further. 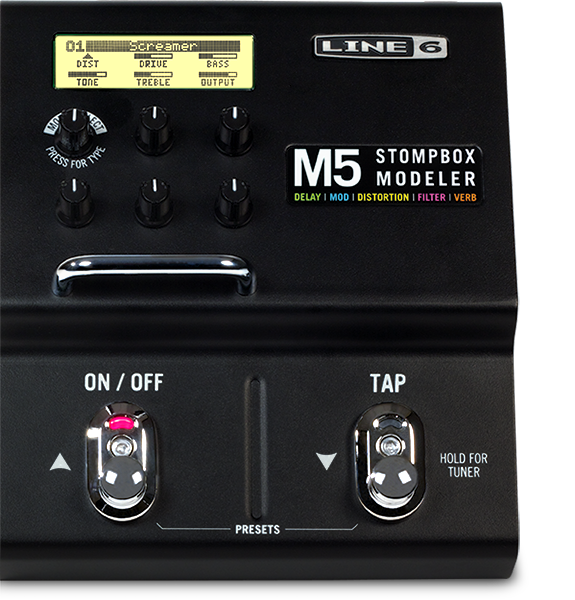 BUILT FOR ROCK AND ROLL
Top-quality build. Amazing value.
With M-Series effects, you’ll always be ready for the next gig. Bent metal chassis and rugged footswitches mean M-Series can withstand some serious punishment on stage. Make sure you’re always sounding great with a built-in tuner. Get the connections you need with MIDI in and out and a pair of 1/4-inch mono/stereo inputs and outputs with true analogue bypass. Connect an EX-1 expression pedal and take advanced control of modulation and delay effects. The bottom line? You get incredible firepower at a price that’s less than a single boutique stompbox.